Every year the International FA Board make some changes to the Laws of the Game, some of which are so small and receive such little publicity that even some referees seem to miss them. One such possible change this season involves the dropped ball, which is simply a method of restarting play after it has been stopped by the referee but where no offence had been committed. This is most likely to occur when play is stopped for an injury but there are many other reasons, such as some outside interference in the game, perhaps a spectator or animal encroaching. Although there is no stipulation in the Laws of the Game, the practice had always been for the referee to wait for a player of each side to contest the ball when he dropped it. Many referees would insist that the players stood about a yard away so they could drop the ball and get out of the way before their boots came flying in. This also made it more likely that the ball would touch the ground before being kicked, which is a stipulation of the Law. It is not in play until it touches the ground. 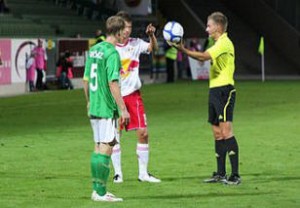 However, in recent years, instead of contesting the dropped ball, players have elected to kick it back to the goalkeeper of the opposing team. This is where this year’s change to the Law comes in. There have been, according to the International Board, a number of instances when this harmless kick has in fact gone straight into the goal. The referees, of course, had no alternative but to award a goal. This seems to have happened regularly enough for the Board to decree that from this season on, a goal cannot be scored direct from a dropped ball. Just a quick explanation of the word ‘direct’. This does not mean that the kicker has to kick it back to the goalkeeper as it hits the ground. He can play it more than once before doing so. The interpretation of ‘direct’ in the laws is that the ball is not touched by another player. Of course if the goalkeeper tried to save it and fumbled it into the goal, the goal would stand. If however, the ball does go direct into the goal, the game will now be restarted by a goal kick, unless by any chance the player kicked the ball back into his own goal, when that would give away a corner.

So often you see referees, even in the professional game, actually directing players to kick the ball back to the opposing goalkeeper. However, I like to give them a choice. In one of my games last week for example, I stopped the game for an injury at a time when the attacking team had possession well inside their opponent’s half. Was it fair to them to have to put the ball back in their opponent’s possession? They quickly took up my offer of a contested dropped ball and yet when last season I put the same alternative in a women’s match, the players didn’t know what I meant.

So the thought struck me whether there might be a hidden message here. With this law change, the International Board has acknowledged the kicking of a dropped ball back to the goal keeper but is this now their favoured option at a dropped ball? I put this point to Neal Barry, the FA’s representative on the IFAB’s technical committee On the contrary, he said ‘it is the IFAB’s view that in the majority of cases, a dropped ball should be contested, which would alleviate some of the contentious issues surrounding this restart in play’. It’s a pity they didn’t take the opportunity of this change to publicise that to all referees.