Technology but only for the goal line

Dick Sawdon Smith Posted on September 5, 2012 Posted in From the middle No Comments

The close season this year, (that’s if you have noticed one, what with Euro 2012 and then the Olympic football), has been a momentous one. This has taken place mostly off the pitch, with the biggest decisions being made at the special meeting of the International FA Board on 5th July. The first item on its agenda was goal line technology. The whole subject has gone through a complete transformation in the last three years; from Fifa banning the Board from even discussing it, to the unanimous agreement of the Board for its use. It has restrictions of course, and the equipment used must come from either of the only two companies that met all the requirements and took part in the final testing, Hawkeye and GoalRef. Tennis fans will be well acquainted with Hawkeye as it has been in action at Wimbledon for some years. On request from players they show a computer generated replay to see if the ball was in or out of play. The first thing to say is, don’t expect anything like that in football. Although Hawkeye for football is a camera based technology, the results of the seven cameras in the goalmouth will not be seen. The requirements of the system are that any crossing of the goal line between the posts by the ball must be accurate and would be transmitted within a second to the referee alone. The referee will be fitted with some form of receiver, much as exists now with radio communication with the assistant referees and fourth official. This means that the decision will still be the referees. 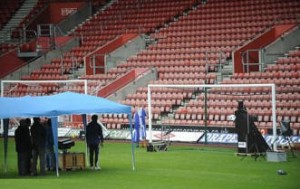 GoalRef is a different system and works on magnetic fields with a sensitised ball. We sometimes forget that Fifa have experimented with a similar system some years ago at the 2005 Under 17 World Cup in Peru. There were some complaints that the flight of the sensitised ball was affected but without doubt the results of the experiment were the reason for it being abandoned by Fifa. Whereas the score of the final was 2-1 the equipment recorded it as 15-13. It seemed to have logged a goal every time the ball went over the crossbar as well as under it. Goalref does not have this problem and what’s more, say their system will also overcome the potential weakness of camera based system if the ball is obscured. Hawkeye however, say the testing has been exceptionally rigorous and fans can sleep easily at night, knowing they are accurate.

Sepp Blatter has said he expects it will be in place for the next World Cup in Brazil but it is now up to each competition to decide whether its club’s can/must use one of these systems. So if we are to see it in the Premier League they must make the decision. Presumably the clubs will pay and the estimated cost for Hawkeye is £250,000 (a weeks wages for Wayne Rooney) and GoalRef say their system will be cheaper. Will we see it in the Champion’s League and the Europa League? An interesting question as Marcel Platini, President of EUFA, is the arch opponent of technology. Although Fifa have said that this will be the only use of technology, Platini fears that once installed there will be calls for it to be used for other debatable decisions such as for example, offside.

England’s games have had a dramatic influence on the change of heart by Fifa, first Frank Lampard’s non-goal in South Africa and then John Terry ‘denying’ a goal at Euro 2012. That last incident raises an interesting point. If goal line technology had been in place, the Ukrainian team would probably have been awarded a goal and yet their kicker was offside, which wasn’t picked up by the assistant referee. If that had happened, you could easily foresee campaigns starting for more technology.