The shirt-pullers that get away with it

One of the more unpleasant practices that’s taken hold in recent years is that of players taking hold of their opponents, particularly in the penalty area, with shirt pulling, and wrapping round of arms. There was a noticeable situation on Match of the Day a couple of weeks ago, when Vincent Kompany the Manchester City captain, whose opponent had his shirt firmly clenched in his hand, was dragged to the ground. The pundits in the studio, with the benefit of slow motion and different camera angles, argued that a free kick should have been given. It happens all the time they said, why don’t the referees penalise it? I can’t speak for that referee but I am convinced the reason he didn’t give it, was that he didn’t see it.

I remember one referee coach, an ex-Premier League referee, preaching that a referee should treat the ball as his own and never take his eyes off it until he hands it back at the end of the game. His reason for this was of course, that where the ball is, that is where the action will be and so that’s where you are likely to see any fouls. Good theory but not always true today, especially when there is a corner or free kick being played into the penalty area.

Take another annoying tactic at a corner, when an attacker places himself in front of the goalkeeper. Jason Roberts of the Royals is a keen exponent of this tactic. Legal up to a point; the guidance to referees is that every player has the right to their position on the field of play.  However, when the ball is kicked towards the goal, the referee has to judge whether the player is impeding the progress of the goalkeeper. But more often than not, a defender tries to get between the attacker and the goalkeeper and then the shoving and niggling begins. So now the referee has another distraction from what he should be doing; keeping his eye on the ball.

I think Martin Atkinson was unlucky last season when he was demoted for one game, because he missed an incorrectly taken corner kick. He watched a player go over to the corner presumably to take the kick and he turned his concentration to the penalty area. What he didn’t spot was that the player didn’t take the kick but another player instead of just kicking the ball, dribbled it into the penalty area. According to the Law, the kicker must not play the ball a second time before it has touched another player. It seemed unfair that the referee was disciplined retrospectively but the player who had deliberately committed the offence, which let’s face it was premeditated cheating, was not. 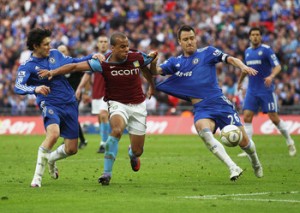 I have a particular sympathy for him because I remember refereeing a game at Reading Town ground, when like Atkinson, I turned my back on the corner taker, to watch the antics going on in the penalty area. For some reason the kicker took a long time but as I looked over to check what was causing the delay, he took the kick. As I turned my attention back to the penalty area, I saw an attacker strike the goalkeeper. In the brief moment that I had looked away, the goalkeeper, so the player claimed, had punched him. Why didn’t I send the goalkeeper off as well his team wanted to know. Simply because I didn’t see it.

We have to accept that the referee hasn’t got eyes everywhere and that watching the ball is his main priority. It might seem obvious but a referee can only punish what he sees. Some managers have claimed that because this holding happens so regularly the referee should ignore it. That is certainly not acceptable, but don’t blame the referee if he misses it