Proposed law changes for next season

Some good many years ago, in an article in the Football Referee magazine, I outlined how I judged whether a tackle was fair or a foul. To my surprise and may I say to my great delight, that law was changed at the end of that season and the wording used was virtually identical to that I had written in my article. Whether my writing had had any influence on the International FA Board, which is responsible for the Laws of the Game, I couldn’t say of course but at least it gave me the satisfaction of being in line with the modern thinking. The law has been changed again since that time and ‘my wording’ no longer appears but I was reminded of it when I received the proposed changes to the laws, which will be debated when the International FA Board meets for it’s annual Laws meeting taking place this year in Edinburgh on March 2nd. 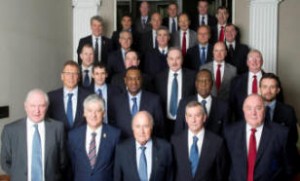 Regular readers of the column may remember that one of the changes this season to the Laws was at a dropped ball. Because players have now adopted the habit at a dropped ball of kicking it back to the opposing goalkeeper, it was thought wise to include the sentence ‘A goal cannot be scored direct from a dropped ball’ It sounds simple enough but what does the word ‘direct’ actually mean I wondered. What about the situation that often happens in these cases, where the player who takes the kick, knocks it sideways before then kicking it to the goalkeeper?  So I wrote and asked the question. The answer I received was clear and clarified the situation completely. In this context I was told, it means ‘not touched by another player’. This year’s planned change is to simply add those five words. The reason it gives is to clarify the interpretation of the word direct in the event of a player playing the ball more than once, so presumably I was not the only one to ask (or was I?)

There are only two other proposed changes and they are both to the offside law. However, they are really changes to the wording rather than to the law as we referees understand it but it might clarify it for certain Premier League managers. First, it relates to the clause which says a player in an offside position shall be penalised if ‘interfering with an opponent’. The part about clearly obstructing the opponent’s (usually goalkeeper’s) ‘line of vision’ remains but the next part which says ‘by movements or making a gesture or movement which, in the opinion of the referee, deceives or distracts an opponent’ has been removed and replaced with ‘by challenging an opponent for the ball,’ which is how referees interpret it anyway. Much simpler and easy to understand and hopefully will lead to fewer arguments.

The other change to the offside law is to ‘gaining an advantage’ A player who was in an offside position when last played by a team mate is still penalised if he plays the ball when it rebounds to him off the goalpost, cross bar or an opponent. To this though is added ‘deflected or is played to him from a deliberate save by an opponent’. So a save might not actually rebound to the opponent but the effect would be the same. Apart from the save however, if an opponent deliberately plays the ball, the offside player should not be penalised. As I say it should not make any difference to the way referees interpret the offside law but it is hoped the new text will eliminate any confusion.

These seem pretty clear although slightly clumsy rewritings, and I would be surprised if there were any objections to them at the March meeting.