Diving is only an offence when done to deceive

Dick Sawdon Smith Posted on October 24, 2012 Posted in From the middle No Comments

It seems that Liverpool never get through a game these days without some incident that raises the query whether their Uruguayan forward Luis Suarez has been fouled or whether he was guilty of  ‘diving’. Listening to the radio commentary on the Liverpool match while driving home last Saturday, it seemed that their game against Reading was no exception. According to the commentator, Suarez was tackled by a Reading player just outside the Reading penalty area and fell to the ground. Neither the referee nor the assistant referee, who was only a few yards away, saw any reason the stop the game. The co-commentator declared that it was either a foul or a dive, suggesting that the referee should have given a free kick for one or the other. This simply illustrated the misunderstanding that many peole in the game have about diving. It may come as a surprise to find that nowhere is diving mentioned in the Laws of the Game. The Laws themselves only give the basic information and say that the referee shall caution (and show the yellow card) to any player who commits unsporting behaviour. However, in the back of the book under ‘Interpretations on the Laws and Guidelines for Referees’ it contains a list of circumstances when a player must be cautioned for unsporting behaviour. This includes ‘If a player attempts to deceive the referee by feigning injury or pretending to have been fouled (simulation)’. The plain fact is that players often go down without any contact being made. It may be that they simply loose their balance. This can easily happen when they are running at speed chasing the ball through a group of players or by overstretching when trying to reach the ball. It is only when a player tries to deceive the referee that he has been brought down by a tackle, that he commits an offence. 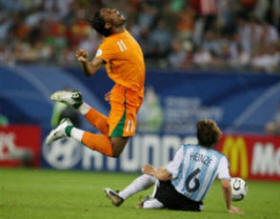 Players may fall to the ground in other ways. A few season ago when Portsmouth were still in the Premier League, one of their players was charging towards their opponents goal hotly pursued by an opponent when he fell flat on his face. The Portsmouth manager of the time, when interviewed on Match of the Day, fiercely attacker the referee, who had taken no action. He should have waited until he saw the video replay because it clearly showed that the player had tripped over his own feet. It wasn’t a case of either a foul or a dive. Players also sometimes dive to get out of the way of an impending tackle. I have a DVD produced by the Premier League, which was used to illustrate to managers and coaches the difference between careless tackles, reckless tackles and tackles where excessive force has been used. The two most contentious incidents are where players sensing a high strong tackle coming in, dive to avoid it. Although they had not been caught by their opponent’s outstretched legs, the dive was an act of self preservation and not an attempt to deceive the referee.

There is another aspect that makes life difficult for referees. I attended a workshop run by David Elleray, former Premiership and FIFA referee and now chairman of the FA Referees’ Committee and President of the Referees’ Association. His theory was that diving fell into two categories which he called ‘fabrication’ and ‘exaggeration’. Fabrication was diving to deceive but exaggeration was when a foul had been committed but the player made a meal of his fall. I remember Robin van Percie admitting he did this and saw nothing wrong with it; he just wanted to ensure the referee knew he had been tripped. It is still up to the referee to make the decision, was it a foul or not, and if not, was it an attempt to deceive?