Dick Sawdon Smith Posted on January 4, 2013 Posted in From the middle No Comments

One player that Royals fans might have been surprised to have seen turning out for West Ham last weekend, was Carlton Cole following his sending off for serious foul play in the previous game against Everton. Thereby of course hangs a tale. Under the current rules, players in the amateur game have to accept that they can no longer appeal against their dismissals, except in the case of mistaken identity, whereas those in the professional game still have that right. Not only that, the appeal is heard quickly by a special panel.

Carlton Cole and Darron Gibson of Everton were both sent off in the same match for what the referee Anthony Taylor considered serious foul play. Both were almost identical offences, a very high tackle that finished up high on the opponent’s body. In Cole’s tackle it was by the smallest margin that his studs didn’t actually go into the Leighton Baines face, whereas Gibson caught Mark Noble in his upper chest. When the referee showed them the red card, the BBC commentator was incandescent with disbelief, ‘Where was the intent?’ he kept screaming, despite intent as a pre-requisite for a foul tackle being removed from the Laws in 1995. No longer does a referee have to try and read the player’s mind, it is the consequences or in some cases the possible consequences of the tackle that makes it punishable under Law 12. 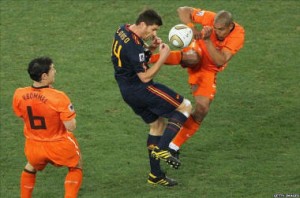 We have all become familiar with the flying tackle, when players dive in, studs first, with one foot or both feet off the ground. Their intention is usually to play the ball but once they have made the tackle they have no control of what is going to happen. Even when they play the ball, if they are lunging towards an opponent, the speed of the tackle makes it likely that it will cause injury to the opponent and that’s what makes it a sending off offence. Why then is a high tackle any different? There is nothing of course to stop a player in lifting his foot high in an attempt to control the ball when there is no other player likely to be in the way of his foot. If he does it in the proximity of other players then it might well be considered as dangerous play and punished by an indirect free kick. If however, it should hit an opponent then it will be considered as kicking, no intent required, and becomes a direct free kick.

Now let’s look at the situation with Cole and Gibson. They both had an opponent in front of them. To raise a foot that high when playing towards an opponent, it is almost certain that they are likely to cause them an injury. In its interpretation of serious foul play, the law says that any player who lunges at an opponent in challenging for the ball from the front, from the side or behind, using one or both legs, with excessive force and endangering the safety of an opponent is guilty of serious foul play. Imagine the injuries that could have been caused had Cole’s foot been a little straighter, a fractured jaw? a broken nose? a stud in the eye? How isn’t that endangering his opponent’s safety?

At the 2010 World Cup one of the few criticisms of Howard Webb’s performance was that he should have sent off de Jong of Holland for serious foul play to which he afterwards he agreed but claimed not to be in a position to see it at the time. De Jong’s offence? A high foot in the chest of Xabi Alonso. And now we have Anthony Taylor being told by the anonymous disciplinary panel that he was wrong in taking this action. Can you blame referees if they are confused?