Just being offside is not distracting an opponent

Dick Sawdon Smith Posted on January 23, 2013 Posted in From the middle No Comments

It is not often that I return in this column to something that I wrote about just a fortnight before. However, I would like to go back to the incident which led me to write about Sir Alex Ferguson’s rant at the Manchester United game against Newcastle. You will remember that referee Mike Dean was criticised for not taking action against his finger waving outburst. The reason for returning so quickly is because there are stories going around, that the reason Mike Dean didn’t report him to the FA, is that he realised he had made a mistake over the incident. I thought therefore that it would be worth looking at the goal that created Sir Alex’s ire and the relevant clause in the offside law, which it must be admitted is contentious, even amongst some referees. 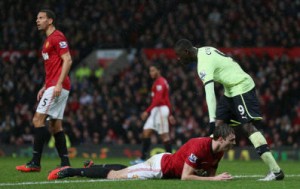 So just to recap the situation. Evans, the Manchester defender, scored an own goal by sticking out a foot, which deflected the ball into the goal. There was a Newcastle player in an offside position about a yard away. The Law says, ‘A player in an offside position is only penalised if, in the opinion of the referee, he is involved in active play by interfering with play or with an opponent’. Interfering with play means playing or touching the ball and clearly the Newcastle player did not do this. I wrote last week that even when referees are proved right by television replays they are still denied by the clubs. I noticed when looking at the Manchester United website, Ferguson is still claiming that the Newcastle player pushed Evans, despite the replay proving this to be untrue. Had he done so, it would of course, been a clear case of interfering with his opponent. The definition of interfering with an opponent given in the Laws of the Game is ‘preventing an opponent from playing or being able to play the ball, by clearly obstructing the opponent’s line of vision or movements or making a gesture or movement which in the opinion of the referee distracts the opponent’. Obstructing the line of vision is usually blocking a goalkeeper’s view of an incoming ball and in this case the player did not prevent his opponent from playing the ball. So we are down to the question, was his mere presence a distraction to Evans?

I go back to a match at QPR some years ago. The ball was crossed from the right wing to a player on the left, who was in an offside position. However, a defender running back managed to get a foot to the ball, preventing it from reaching the offside player but deflecting it past his goalkeeper for a goal. The assistant referee flagged for offside which the referee gave. However, the assessor deducted ten marks from the assistant referee’s assessment. It went to the FA who disagreed and restored the assistant referee’s deducted marks. Somehow it then found its way to FIFA, who said the assessor was right after all. The fact that the defender was aware of the offside player should not be considered as a distraction. That occasion set the mark. The mere presence of an offside player should not be taken in itself as a distraction to the defender. It is only when, in the referee’s opinion, that he makes some gestures or movement that deceives or distracts the defender.

That clearly did not happen and Mike Dean will know this law as well as anyone, so what ever his reason for not reporting the antics of Sir Alex, it certainly wasn’t because he realised he had made a mistake.