What Players Must Wear

Dick Sawdon Smith Posted on 25 November 2016 Posted in From the middle No Comments Tagged with Equipment, Law 4, Undergarments 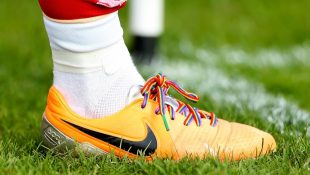 It used to be enough to get the whole team turned out in the same coloured shirts but now the International FA Board seem have an obsession with what players wear. There are so many regulations to be aware of.

First when players began to wear thermal undershorts, it was decreed that these must be the same colour as the shorts. As I understand it, this is only where they are longer than the shorts, but I see substitutes asked to pull up their shorts when being checked.

Next, it was players wearing long sleeved undershirts under short sleeved shirts, which the Board says, must be the same colour as the main colour of the shirt sleeves.

Then their attention moved to socks. Many players today use tape outside their socks to keep their shin guards in place. This tape or other material must be the same colour as the part of the sock that it covers.

The Board then legislated on tights, it’s not only girl and women footballers who wear them, particularly in the colder weather. The tights must be the same colour as the shorts with the added stipulation that if the shorts have a different colour edging, the tights may be that colour instead, providing all that team’s players wearing tights have the same colour.

The Laws rewrite now says that goalkeepers may wear caps, (who ever thought otherwise). Other players may not wear peak caps but can wear other head covering as the Law calls it, providing there are no ‘protruding elements’. However, they can only be black or the same colour as the shirt but everyone in a team wearing head covering must have the same colour. There are a lot more restrictions for head covering, but mainly aimed at women’s football where for religious reasons they need to cover their heads.

Another duty for the referee, who must refuse to allow any player not conforming with any of these restrictions, taking part in the game.